Noah Gladstone holds a Bachelor’s and Master’s Degree in trombone performance from the University of Southern California. He studied under Byron Peebles and Ralph Sauer of the Los Angeles Philharmonic, Jay Friedman of the Chicago Symphony and Terry Cravens, bass trombonist of the Los Angeles Opera. Noah performs regularly in symphony orchestras throughout the Southern California region, as well as in the Hollywood studios for television, film and video games. He has performed with notable orchestras: The Chicago Symphony Orchestra, The Los Angeles Philharmonic, Juilliard 415, The Hollywood Bowl Orchestra, New West Symphony and many other fine ensembles around the world. In addition to his orchestral experience, chamber music and studio work, Noah is a founding member and sackbuttist of Tesserae, an early music ensemble performing the music of the Renaissance and Baroque on historical instruments. He has always been highly regarded in the trombone community for his expertise on all things vintage brass, his advice when buying and trying horns and his honest portrayal of instruments through photographs and descriptions. He is also an active member on the Trombone Forum where he contributes under the name “Slipmo”.

An active educator in the community, Noah maintains a studio of private students who are all motivated and aspiring musicians, many of which have gone on to successful careers in music.

In addition to trombone playing, Noah is an orchestra manager, contracting personnel and managing the musical operations of The San Bernardino Symphony, The West Los Angeles Symphony Orchestra and studio sessions (Notably the videogame League of Legends) for media through his other business, Hollywood Scoring

Noah performs professionally on the Alto/Tenor/Bass/Contrabass Trombones, Euphonium, Bass Trumpet, Sackbut, Norwegian Bukkehorn, Ophicleide and the Serpent. Noah is a member of the American Federation of Musicians Local 47 in Los Angeles.

When not working, Noah enjoys spending time with his wife and daughter, anything trombone related, pinball (I own a 1986 Pin*Bot and a 1985 Sorcerer), golfing, enjoying fine food and filling up my house with vintage stuff. 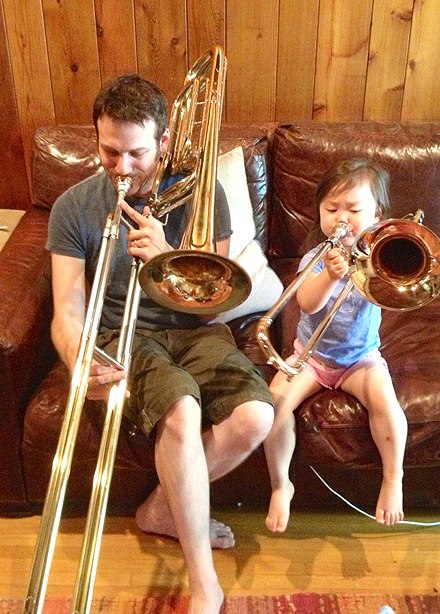 Me and my daughter, playing a duet (I'm playing a Miraphone contrabass trombone in BBb and Emmeline is playing an Eb alto trombone by Thein) 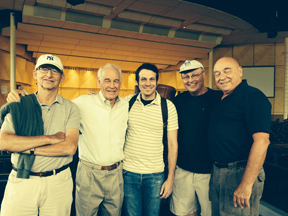